ABC Kids (formerly known as ABC For Kids) is an Australian children's television brand on the ABC. They are also known to fans as the distribution company for The Wiggles albums since 1991, videos since 1993, and their primary TV broadcaster since 2002.

In April 2020 and onwards, to coincide with the premiere of Season 2 of Bluey, the ABC Made team had to re-design the Apple and Bee items to be 2D animated mascot characters, much like in the 1992 promo. Carrot was originally going to be returning as an animated mascot with a worm on it (as evidenced by some early artwork for the three returning mascots on the ABC Kids 2020 re-brand's "Making of" video, but was later removed while Croc, a new animated mascot, took the Carrot's place. Also, Ant and Bird were both considered to appear, but were later removed (although they both have early designs of their own in the "Making of" video. In addition, all three current mascots have child voice actors of their own. Apple and Bee are voiced by female kids, and Croc is voiced by a male kid. 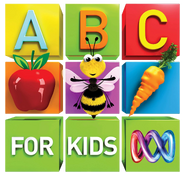 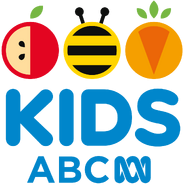 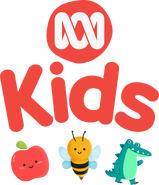 2020 on-screen logo with the three mascots

All three animated mascots together