"Advance Australia Fair (Australia's National Anthem, Wiggly Version!) is The Wiggles song from "Hits And Rarities". It was originally recorded for "Anthem - Celebration of Australia ", an album issued by the ABC in 1997 featuring various acts doing covers of the national anthem, and appears in the same recording there.

In 2014, The Wiggles re-recorded the song with the new members, and uploaded two videos to YouTube of the song. One is a music video with the new recording, the other was a live performance at the 2014 Australia Day Lunch.

Beneath our radiant Southern Cross
We'll toil with hearts and hands;
To make this Commonwealth of ours
Renowned of all the lands;
For those who've come across the seas
We've boundless plains to share;
With courage let us all combine
To Advance Australia Fair.
In joyful strains then let us sing,
Advance Australia Fair. 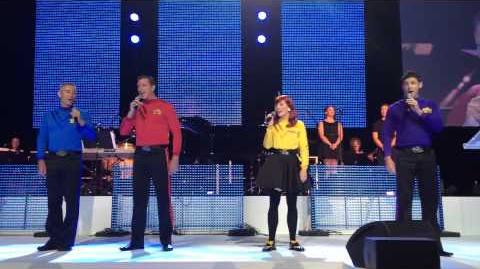 The Wiggles at Australia Day Lunch

The audience
Community content is available under CC-BY-SA unless otherwise noted.
Advertisement