Apples & Bananas is the 46th Wiggles video that was released on March 5, 2014. It's the 3rd Nursery Rhyme video after Sing a Song of Wiggles, and first one with the New Wiggles.

Apples & Bananas is the tastiest treat for children since tea time! Twenty-two bite-sized nursery rhymes and songs that have been sung by children for hundreds of years have now been given The Wiggles' special musical magic! Sing along with special guest Lee Hawkins to 'This Little Piggy Went to Market' and with the delightful Dennisha Pratt on 'Miss Polly Had a Dolly'. There's the "spider-iffic" actions of 'Itsy Bitsy Spider', Dorothy the Dinosaur swings on 'Shortnin' Bread', then we jump on board for 'The Wheels on the Bus' and 'This Old Man Came Rolling Home'! The Wiggles travel across the globe to Ireland for 'I'll Tell Me Ma' and 'Michael Finnegan' and then over the continent for the delightful French song 'Sur le Pont d'Avignon'. With centuries of songs served up fresh for your child, Apples & Bananas is certainly "a-peeling"! 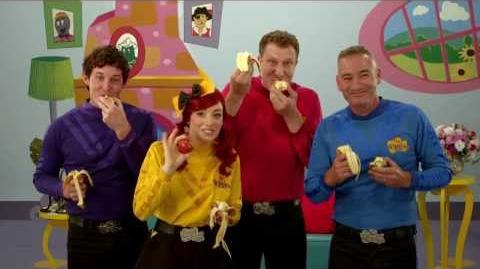