"Big Red Car" (titled "Dance Party" in the US and Canada) is the third Wiggles video released on October 9, 1995. This marks the debut of Wags the Dog and two vehicles, the titular Big Red Car and The S.S Feathersword.

The video was remade in 2006 as Here Comes The Big Red Car.

Note: All songs are from the album of the same name except where noted otherwise. See here for more information on the album, including the full track list with more songs.

The Wiggles arrive at home. Jeff, although driving, has fallen asleep. 1, 2, 3, Wake up, Jeff! Greg starts to ask him again, but Jeff's fallen asleep again (he's wearing a more complete sleepsuit this time, a night shirt, a night cap, and a candle). 1, 2, 3, Wake up, Jeff! So they say that Jeff needs to do a warm up and the Can you point your fingers and do the twist.

Murray walks in carrying a plate of bones for a dog named Wags. Anthony thinks about eating for a second and that he is really hungry but Murray reminds him it's for Wags. Anthony then imitates a dog. The others laugh.

The Wiggles dress up as cows and Jeff talks about cows.

When the Wiggles start to flap like a bird, they start to fly up into the sky.

Murray, Anthony and two kids are on the couch looking at all of the pictures that Murray is showing that what he has done on his holiday, then Anthony is talking about what they did on their holiday.

The Wiggles are wearing hats in different places such as the sun, fishing, horse riding and playing the bagpipes.

Anthony asks Greg if he can do some magic tricks (claps hands) for everybody. Greg said he'd love to. Anthony says there's one problem; they should ask the kids first. Greg agrees. As Anthony leaves, Greg asks the camera if you want to see some magic tricks? Oh, they do! He slaps hands with Anthony who appears in and out briefly. Greg needs some magic things. First, he needs his magic cape. Anthony arrives with a cape, and Greg puts that on. Now he needs a magic hat. Anthony arrives with a hat, and Greg puts that on too. And most importantly he needs his magic wand. Anthony arrives and gives him the wand. Greg puts away the wand for now since there's something very special he wants to show you.

Greg goes to a small table behind him and gets a bag with magic hankies in it. He shows the inside of the bag and there's nothing there "hello hello". He waves the wand over the bag and then reaches in but there's no magic hankies! He shows everyone the inside of the bag again and it's empty. Oh, he forgot to say the magic words. How silly. He asks the audience if they can all help him say the magic words which are "Wiggle Waggle." And wave your fingers in the air at the count of 3. Greg counts to 3 and waves his fingers at the bag, saying "Wiggle Waggle!" Greg looks surprised. He reaches in and pulls out a pink hankie. Let's try again. He shows the bag is empty and then readies everyone for the count to 3. 1, 2, 3, Wiggle Waggle. Greg reaches in and pulls a green magic hankie. Let's try one more time. Maybe they can get a big magic hankie. Here we go, 1, 2, 3, Wiggle Waggle. Greg pulls out a huge magic hankie. Put your hand up if you did that. Wow, it's bigger than I thought. It's time for another trick. He has a vase of magic flowers. Well the vase is empty but with some magic we can get some. He takes the big magic hankie and covers the vase. He asks for help one last time. 1, 2, 3, Wiggle Waggle. He pulls the hankie and the vase is full of flowers! Anthony asks the audience if they helped and to give yourselves a magic clap. Anthony claps and he and Greg disappear.

Murray is making a game two kids have to guess what these things are like smell and feel.

Now that they're on dry land, Captain Feathersword suggests to The Wiggles and the other pirates that they do a pirate dance together.

Greg meets Henry the Octopus and Dorothy the Dinosaur. Dorothy is having a dance party, and everyone's invited!

The Wiggles say goodbye and they run to the Big Red Car for a drive. 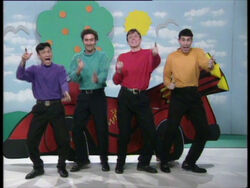