Connor as a baby with his parents

Connor in "Sing a Song of Wiggles"

Connor with his father Paul and his brother Felix 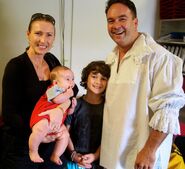 Connor with his parents and his brother Felix

Connor dressed as Captain Feathersword
Add a photo to this gallery
Retrieved from "https://wiggles.fandom.com/wiki/Connor_Paddick?oldid=644311"
Community content is available under CC-BY-SA unless otherwise noted.