Dorothy the Dinosaur's Memory Book is a Dorothy the Dinosaur video released in 2008. It is a clip show of her second TV series, as she and Wags the Dog look through a scrapbook of memories doing various tasks and meeting several guest stars.

In the US and Canada, video was sold under the title "The Wiggles Present: Dorothy the Dinosaur" (the original title remained on the DVD menu and video itself, and was referenced on the back cover). It was the first Dorothy-centered video to be released in those countries, and to tie it in with The Wiggles more, a bonus jukebox of songs from Wiggledancing! Live In Concert was included, as well as a Wiggles music video for the song Wash Your Hands.

The Wiggles Jukebox (North America only)

All songs taken from Wiggledancing! Live In Concert 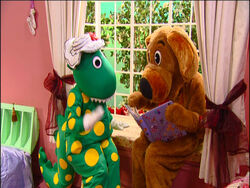 Retrieved from "https://wiggles.fandom.com/wiki/Dorothy_the_Dinosaur%27s_Memory_Book_(video)?oldid=607873"
Community content is available under CC-BY-SA unless otherwise noted.