Wigglepedia
Register
Don't have an account?
Sign In
Advertisement
in: The Wiggles TV series, TV Series Galleries, 2015,
and 2 more

Stereo
"Emma!" is a spin off series which first aired in 2015. It was at the time the first to focus on only one Wiggle.

4 minutes
Series 1 showcases Emma in her room dancing to different types of music on a themed day. One song is performed in each episode. The dance is decided when Emma's Music Box plays its tune, then presents Emma with an item of some sort that relates to the dance.

At the time of it's release, this first series was the shortest Wiggles series to date with episode lengths of 4 minutes, meaning production was simpler than other Wiggles series. The setting took place in Emma's room, which was the only setting throughout the entire first series. To follow that, Emma is the only character to appear in the first series. The new music provided was similar to the music in Dorothy the Dinosaur TV Series, where there were less instruments involved in the songs. Some of the instrumental songs are recycled tracks from the Go To Sleep Jeff! album. The main instruments used were acoustic guitar, bass, bouzouki, six string banjo, and piano.

Despite the simple setting and plot, the show quickly gained popularity as Emma was already so popular for being the first female wiggle. Soon after the airing of this series, there have been multiple follow up videos and merchandises sold.

The following year, a Lachy! TV series debuted following a similar format, but with a wider range of songs and settings which would influence future Emma! series.

11 minutes
Series 2 is quite a bit different from the first. At 11 minutes rather than 4, Emma is no longer confined to her room as we now also see her visit her garden, dance studio and dream room, as well as outside locations. She also interacts with others, from children to adults from all over the world and all walks of life, often with their own types of dance or music to teach.

Similar to the Lachy! TV series, fellow Wiggles make appearances, though not as their Wiggles characters. The series consists of 26 episodes, a few episodes less than first series' 30 episodes. There are also more songs performed in one episode ranging to about 4 or 5 songs per-episode, as well as more instruments to perform the songs with, making it more so like a regular Wiggles series.

11 minutes
Series 3 once again goes in a different direction from the others, though with similarities to both. This series follows the adventures of Emma as she is given a bow-themed item from one of her three music boxes, and uses that item in or around her house. She then uses her imagination to take her to an imaginary world, where that item is put to use ether for problem solving or the item becomes part of the imaginary location she's at.

Like series 1, Emma is the only character on screen, though more songs are featured with the extended runtime, like series 2. The only other time she interacts with someone other than the viewer is when a stuffed animal is in her imaginative places. Most of the places and props in the series are DIY-type builds made of paper, cardboard, plywood, etc.

The number of episodes decreased to 13 that are each still 11 minutes long. The main setting for the series was Emma's house filmed on location at her previous home in Hopewood House which is where she and her family lived up until 2018, and where she and Lachy were married. The settings for her imagination were filmed at Hot Potato Studios.

Emma in a promo picture 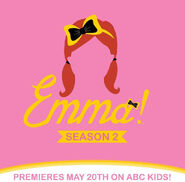 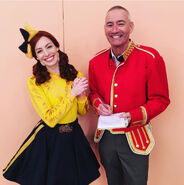 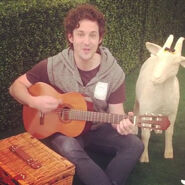 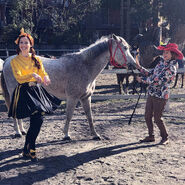 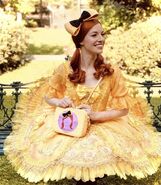 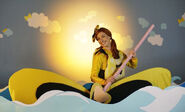 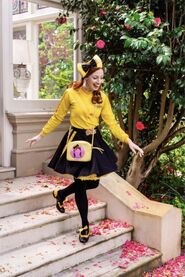 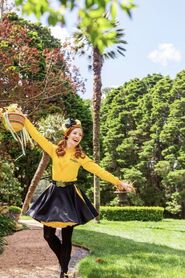 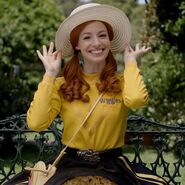 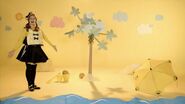 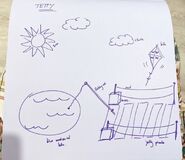 Sketch of jetty set for "Fishing for My Kite"