Fun and Games (2020)
Emma! 2 is a Wiggles album that was released on September 27th, 2019. It is the soundtrack to the second series of Emma!, as well as a follow-up to the first Emma! album.

Hello there, my name is Emma. It's nice to see you today! I have chosen a selection of my favourite songs from the new Emma! series to share with you. Walk, jump, skip, dance or wheel your way to the garden as we visit dancing butterflies, frogs, kittens & ponies. The next bowtiful adventure is waiting for us inside the music box - I wonder what we will find. Also, pop on your dancing shoes as we try samba, salsa, ballet, tap, Highland, Irish & jazz. Listen out for the 'Five Fingered Family' in Tamil & In Anindilyakwa, the language of the Warnindilyakwa people that live on Groote Eylandt, Right at the top of Australia. My dear friend, Emily Wurramara, sings with me in Anindilyakwa. I'm so excited to feature new songs like the Greek nursery rhyme 'Mia Oréa Petalútha', 'Walking on the Moon' & 'Emma Baila Baila!'. Enjoy this "Emmatastic" music & have a bowtiful day! 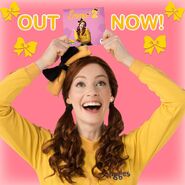