"Come in"
Flora Door is the "magical" talking door at Wigglehouse who first appeared in TV Series 2 and has been the door at Wigglehouse in all versions since although only appearing in The Wiggles (TV Series 2) after she replaced Door from The Wiggles (TV Series 1). For that reason after the replacement, she is much more friendlier, polite and often very tolerant and pleasing to talk to, especially to The Wiggles and The Wiggly Friends. However, she sometimes does not allow people to enter without certain requirements (such as saying the magic word or curing her hiccups). Maria Silvestrini provides the voice-over (She has the exact same voice as Kaz the Cat).

Following TV Series 2, Flora started becoming rendered as a background, silent prop on stage inflatable sets and other illustrated backdrops for years, until Ready, Steady, Wiggle! Series 3, where she was once again reimagined as a spoken character. Her current voiceover is provided by Leanne Williams.

The Wiggles and Flora in "Wiggle Food" 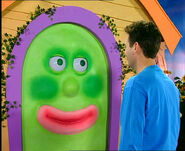 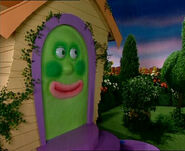 Flora in "Dressing Up" 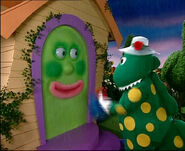 Flora in "Your Body"

Flora in "Exercising With Our Friends"

Flora in "I Can See You, You Can See Me"

Flora in "Brr It's Cold Outside"

Flora in "How Are You Feeling Today?"

Flora in "Lullabies with Love"
Community content is available under CC-BY-SA unless otherwise noted.
Advertisement