"Hair" it is, everyone... Furry Tales, "fur" your listening pleasure! Anthony, Emma, Lachy and Simon are "eggcited" with 21 wiggly songs about their animal friends. 'The Corroboree Frog' will have you croaking with fun while the 'Bunny Hop' is a "hare-raising" experience! Jump and sing along with 'The Monkey Dance' and then there's 'Say the Dance, Do the Dance' which is the catchiest song you'll ever hear! Sing along and dance along with Furry Tales, the best DVD since Noah built the ark!

Song #2: There Are So Many Animals

Simon tells them about the next song and when the came to the father duck instructions, Captain made quacking noises too loudly and scare Simon. Then, he tries again softly.

Song #19: Five Little Ducks - In the middle of the song, Father duck lost his five little ducks and Captain Feathersword cries because the ducks are gone but Simon made him feel better by telling the captain how the rest of the song goes.

Song #21: Uncle Noah Is Calling You 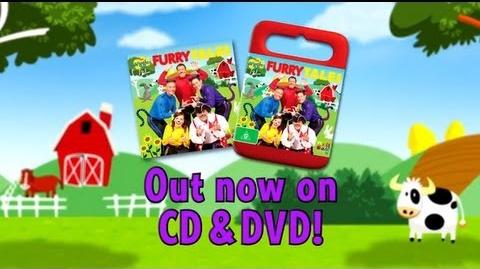