She attended Newtown High School of the Performing Arts, earning high marks in English, Mathematics, Science, Australian History and Australian Geography. As of 2017, she attends the University of Sydney, where she is writing a thesis on "The WNBA, the Anti-Women Backlash, and the League Response" under the supervision of Thomas Jessen Adams.

Georgia enjoyed playing basketball, but her career was cut short by injury. However, she soon found a substitute in wheelchair basketball. "It gave me an outlet and a passion to pursue," she recalled. She is a tall forward/centre who is classified a 4.5 point player. In 2014, she joined the Sachs Goudcamp Bears, one of the teams in the Women's National Wheelchair Basketball League. The team was renamed the Sydney Metro Blues in 2016, and won the league championship in 2017. That season, Georgia had five double-doubles. She led the Sydney Metro Blues for scoring, and was second for assists. She was also named to the All-Star Five. She also played for the New South Wales junior side that won the Kevin Coombs Cup in 2016.

In 2015, Georgia was selected as a member of the under 25 national side (the Devils) for the 2015 Women's U25 Wheelchair Basketball World Championship in Beijing. Later that year she played with the senior team, the Gliders, at the 2015 IWBF Asia-Oceania Championships in Chiba, Japan, in October 2015. She subsequently joined the Gliders for the Osaka Cup in Japan in 2016, and the 2017 IWBF Asia-Oceania Championships back in Beijing in October 2017.

In 2020, She would appear in The Soul Movers music video "Circle Baby"

Georgia in her debut with her daddy

The Wiggles and Georgia in "Big Red Car"

The Other Wiggles, Sam, Sammy and Georgia

Murray and Georgia in "Wake Up Jeff!"

Georgia in "Wake Up Jeff!"

The Wiggles and Georgia in "Wake Up Jeff!"

The Other Wiggles and Georgia

The Wiggles and Georgia in "Wiggly, Wiggly Christmas"

Georgia as an Owl

Georgia in "Yule Be Wiggling"

Georgia as an angel

Georgia and her parents in 2014 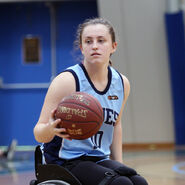 Georgia in 2017
Community content is available under CC-BY-SA unless otherwise noted.
Advertisement