Go Santa Go! is the forty-forth video that was released on November 6, 2013. It's also the current generation's first story based video.

Ring the bells, it's Christmas time! The happiest band in the land, The Wiggles, have joined with the happiest man in the land, Santa Claus (played by entertainment legend Bert Newton with the dazzling Patti Newton as Mrs Claus), to deliver The Wiggles' best ever Christmas songs and story. Go Santa Go! has The Wiggles helping Santa get the presents ready for Christmas Eve, but Lachy's invention turns Santa's elves from tiny helpers to football player-sized helpers (Jay Laga'aia and real football stars Lote Tuqiri and Joel Reddy)! With traditional Christmas carols and fun new songs Go Santa Go! is the most fun you'll have since Santa first grew his beard!

The video starts with The Wiggles Logo is shown. Then, the sleigh bells jingle and jangle for the song: Go Santa Go plays in the background. Until, it shows the Wiggly Group in ornaments to show their names appears in the opening sequence. While, the video title comes up.

The Wiggles introduced themselves and wishing everyone a Merry Christmas. Simon gets ready for a Wiggly Christmas in Wigglehouse. Anthony is busy and making eating some delicious Christmas fruit salad that he has a big bowl and giving Lachy a some fruit in his bowl. Emma's introducing to her favourite Christmas carol so they could do the actions to the bird came to welcome baby Jesus.

Simon tells everyone about Lachy is gonna clean up with his invention. Lachy arrives with his goggles, his gloves & his scientist jacket. He is showing a special water formula that I am perfecting will speed up the actions of anyone who comes in contact with it's lavender like mist. When he's putting on goggles & sprays himself with the formula. Then, it slows down, until he speaks slowly. Simon is using his cleaner towel to wipe Lachy’s goggles so he should give him some normal speed. When he asked about getting ready for Christmas because it's gonna be a good one this year. Simon has a question for everyone.

Song #2: Everybody, I Have a Question

Anthony introduced him to say "Ahoy there, Captain Feathersword!" When Emma should say, "Merry Christmas, Captain Feathersword!" She asked where Dorothy the Dinosaur and Henry the Octopus went. Captain gives a solution that they both went down for a beach to set up a picnic for everybody. He doesn't know where Wags that he might be bouncing around the Christmas tree.

Song #4: Wags is Bouncing Around the Christmas Tree

Emma tells everyone that Wags bouncing off to the beach, so they went to the beach for having a picnic.

Emma picks up a bowl to asked Anthony that fruit salad was delicious. Anthony wished merry Christmas to her, that looked after portion controls at Simon. Lachy yawns when his picnic is very tired that he falls asleep. Simon looked Lachy is asleep. So better wake him up so he doesn't miss their annual Christmas hula dance. When they count to three. "1, 2, 3. Wake up, Lachy!" Lachy wakes up and dances the Christmas hula. The Awake Wiggles went, "Huh?"

Anthony checked off the list that he did their annual Christmas hula dance, until he hears something . That's the mobile phone. Let's investigate to find out who's ringing. 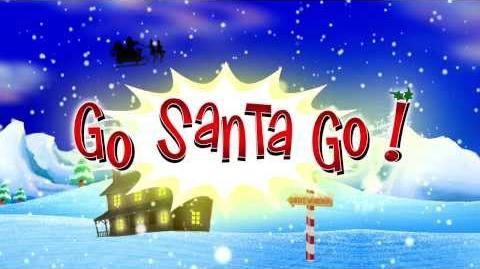