Greg is the original yellow Wiggle and the original lead singer of The Wiggles. He was with The Wiggles from its founding in 1991 until 2006, when he left to obtain medical treatment for a condition known as orthostatic intolerance. He was replaced by Sam. He briefly returned in 2012 but was then replaced by Emma.

He was the lead singer in the original incarnation of the group, singing lead on most of the group's songs.  He has played guitar, keyboards, and drums in the videos and at concerts, making him one of the only Wiggles alongside Sam and Jeff to have played all three of the other Wiggle's lead instruments.

Greg is known as the driver of the Big Red Car. He is also known for doing his magic tricks in the classic years of The Wiggles. His magic trick was portrayed more in TV Series 2 when he would always try to find ways to pull the rabbit out of his hat but to no avail.

In 2006, he retired after being diagnosed with Orthostatic intolerance, and Sam replaced Greg until 2012. Upon returning to the group in 2012, he did everything he did in the early days before 2006, except for magic tricks. He stayed for a year before being replaced by Emma. 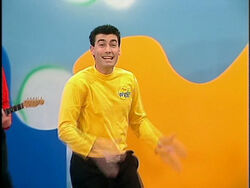 Retrieved from "https://wiggles.fandom.com/wiki/Greg_Wiggle?oldid=616256"
Community content is available under CC-BY-SA unless otherwise noted.