Hygiene is the 12th episode of TV Series 2.

Anthony is getting ready, but he wants to skip brushing his teeth. His puppet reflection appears in the mirror and reminds him to brush his teeth twice a day.

The Wiggles are at the table with a pile of sandwiches in the middle. Jeff gets the first sandwich but wants to put it back. The other Wiggles tell him that's a no-no and that if he touches it, even if he washed his hands, he should eat it and not put it back. Jeff wanted a bigger sandwich which is the one at the bottom. There’s only one way to get to that sandwich, so each of the Wiggles grabs a sandwich and starts eating. Captain Feathersword shows up and gets the last sandwich!

Dorothy sneezes, and a cloud floats around the Wiggle Town. The Wiggles arrive and tell her to cover her nose. They are also Wiggle Doctors and for a cure, they offer a song.

The Wiggles are cleaning their instruments. Murray asks how dirty is dirt? Greg explains that some dirt is clean, like the soil, and other dirt is germy or dirty, like the kitchen floor. Everyone should wash their hands. Jeff asks how small are germs, and the Wiggles shrink to germ size to see what it's like.

Jeff is about to touch your hair when his puppet reflection in the mirror tells him to wash your hands first!

Magic Greg pulls out of his hat a TV set in front of the group.

The Wiggles recap some hygiene tips and say good-bye. 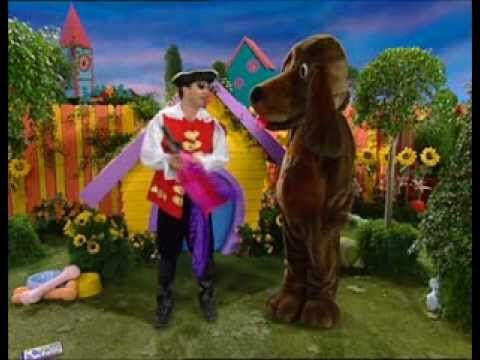 Retrieved from "https://wiggles.fandom.com/wiki/Hygiene?oldid=742851"
Community content is available under CC-BY-SA unless otherwise noted.