"It's a Wiggly Wiggly World!" It is the ninth Wiggles video, released on July 25, 2000. This is also the first Wiggles video to feature major guest stars, such as Slim Dusty, Christine Anu, Rolf Harris, Kamahl, Tim Finn, Jimmy Little and Atsuko Arai.

The Wiggles sing an assortment of songs with their friends from all over Australia.

Note: All songs are taken from the album It's a Wiggly Wiggly World!, except where noted otherwise.

The video intro it is the theme of TV Series 2.  The difference is instead of The Wiggles appearing in front of Wigglehouse, they're in space floating in front of the Wiggly Wiggly World! with the video title.

The Wiggles introduce themselves and ask if they want to meet their friends Captain Feathersword, Dorothy, Wags, and Henry.

Greg introduces Slim Dusty in the next song.

The Wiggles and Mascots dance in a barn while Slim Dusty plays guitar from the rafters. Murray introduces Christine Anu who talks about the Taba Naba song which comes from the Eastern Torres Strait and is sung in the Meriam Mir language. Taba Naba translates to "Let's go to the reef and have a good time".

Greg and Christine sit with a bunch of kids to do the dance while the other three Wiggles play guitars. Anthony introduces Rolf Harris. Rolf has a wobble board, which makes a wobbly sound when you shake it. He wrote the next song.

The Wiggles dance around while Rolf uses the wobble board. Greg introduces Kamahl. He and Dorothy will sing together for the first time.

Greg says we have a problem. Captain Feathersword can't stop drinking rosy tea from Dorothy. To show how addicted he is, Captain asks Greg a bunch of questions like: What's letter comes after S? What do you put a golf ball on? What do you eat scones and jam with? The answer of course is Tea!

Murray talks about the time when he once spoke about the stars. Flashback – Murray looks in the sky and wants to serenade them.

He wishes he could see his favorite constellation the Great Guitar. And then he's able to spot it. Murray marks he always wanted to play with the big stars. Greg introduces Tim Finn, who's from New Zealand. He wrote the next song for the Captain.

Murray and Greg make animal sounds and they guess what they are.

The Wiggles and the pirate dancers greet Captain Feathersword. Murray remarks how everyone's there to dance with him. Well, blow me down. Murray blows him down. Captain says he plays that game all the time, so it's time to play it.

Jeff introduces the next song.

Jeff introduces Jimmy Little and asks what his favorite song, which is the next one.

The Wiggles introduce Atsuko and she's from Nara City in Japan. She wears a kimono. They will sing Haru Ga Kita which means Spring Has Come.

The Wiggles say goodbye as the credits roll up in front of "Wiggly Wiggly World" planet, with the theme song playing. 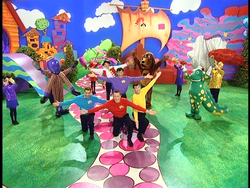 The Wiggles It's A Wiggly Wiggly World (Part 3 of 4)
Part 3
Add a photo to this gallery
Retrieved from "https://wiggles.fandom.com/wiki/It%27s_a_Wiggly_Wiggly_World!_(video)?oldid=621935"
Community content is available under CC-BY-SA unless otherwise noted.