"LIVE Hot Potatoes!" is the 19th Wiggles video released on January 11, 2005 in North America. This is the third concert video released, after The Wiggly Big Show, and is the first concert video of the 2000's. This was filmed in 2003 during the "Lights, Camera, Action, Wiggles! Show".

It was filmed at the Sydney Entertainment Centre on the December 20, 2003.

The Overture starts and is played by an orchestra. After that, The Wiggles perform a concert in front of their home town of Sydney, Australia featuring many of their classics, and also songs from the Lights, Camera, Action, Wiggles series, with the orchestra also helping out with the songs (an example being I Wave My Arms And Swing My Baton.)

Live from the Sydney Entertainment Centre, and this is the last homecoming stop for The Wiggles Australian Tour in 2003. 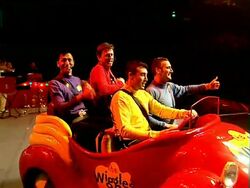 Retrieved from "https://wiggles.fandom.com/wiki/LIVE_Hot_Potatoes!_(video)?oldid=614714"
Community content is available under CC-BY-SA unless otherwise noted.