Do the Skeleton Scat

Thanks for Waking Me Up!

Lachy (or Lachlan) is the Purple Wiggle who replaced Jeff in 2013.

Like Greg and Sam, he is the lead singer in most songs. Some of the notable songs he sings lead on are Rock-a-Bye Your Bear, Let's Go (We're Riding In The Big Red Car) and The Shimmie Shake!.  Since early 2017 he has taken over the role of main lead vocalist for the group, whereas he previously shared this with Simon a little more evenly.

He plays the keyboard, just like Jeff, which makes him the only Wiggle in the new generation to play the same instrument as his same-coloured predecessor. He also plays the tambourine, guitar, drums, and accordion on occasion.

He likes inventing, but most of his inventions backfire on him or have an accidental side effect. 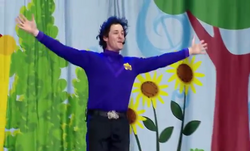 Retrieved from "https://wiggles.fandom.com/wiki/Lachy_Wiggle?oldid=662950"
Community content is available under CC-BY-SA unless otherwise noted.