Leanne Yeates (also known under her maiden name Leanne Halloran) (b. January 22, 1963) was the first choreographer of The Wiggles. In 1977, she and her sister Donna Halloran founded The Halloran School of Dance which was used in the early Wiggles seasons. She started working with The Wiggles in 1995 when students of the Halloran School appeared in their Big Red Car video.

In 2000 (after the video "It's a Wiggly Wiggly World!"), she stopped playing characters and kept on being the choreographer throughout the years until she left The Wiggles in 2001.

She visited The Wiggles again 14 years later in early 2015 and since then she has occasionally worked and performed with them.

Leanne and her niece Cassie

Leanne and Roland the Remarkable

Leanne as the Tooth Fairy

Leanne at the Halloran School of Dance

Leanne with Donna and Kate Halloran and Ryan Yeates in 2014 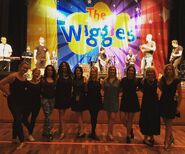 Leanne dancing with Little Lachy
Add a photo to this gallery
Retrieved from "https://wiggles.fandom.com/wiki/Leanne_Halloran?oldid=666937"
Community content is available under CC-BY-SA unless otherwise noted.