Welcome to Network Wiggles! Join the fab four of fun in four of your favorite episodes of wiggly TV!

Sing and dance along with The Wiggles, Dorothy the Dinosaur, Wags the Dog, Henry the Octopus and Captain Feathersword.

Discover the land Down Under with Australian music, games and animals. Beauty mate!

See here for information on the advertising of Lights, Camera, Action! 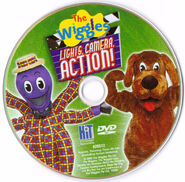 Inside of the insert

Back of the Mail guide 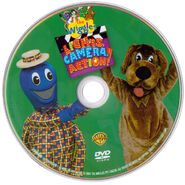 Disc
Add a photo to this gallery

Note: Menus are the same in both the HiT Entertainment and Warner Home Video versions, except the Trailers menu which is absent from the latter. The Trailers menu takes you to further individual menus, shown below in the "DVD Previews" section.

Henry the Octopus
Add a photo to this gallery

Note: The warning and logo screens play before the first episode. The trailers all play after the last episode.