Play Your Guitar With Murray

Murray is the original red Wiggle, known as the "king of guitars". He was the red Wiggle for 21 years, before being replaced by Simon Wiggle in 2013. He has since made cameos in some episodes of Series 7.

He loves playing guitar, as he does off-screen, and is also considered the best musician of The Wiggles. Unlike the other three Wiggles, he only played guitar during his tenure, but he also played other instruments like the flute or the trombone on occasions. In some later videos, he played guitar in many songs rather than dancing. This happened starting with some of the Sam videos and continued during the Celebration era. He plays guitar throughout the concerts except for a few select songs. He eats pancakes for breakfast, and his favourite food is bananas.

In the original generation, he was sort of a secondary singer. His well-known lead songs are Five Little Ducks and Starry Night. 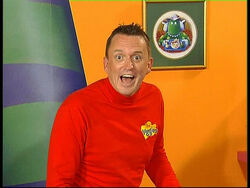 Retrieved from "https://wiggles.fandom.com/wiki/Murray_Wiggle?oldid=588858"
Community content is available under CC-BY-SA unless otherwise noted.