Ready, Steady, Wiggle! is the current generation of Wiggles' first TV Show. 2 series, each consisting of 52 episodes, originally aired on ABC in Australia, Four Kids in New Zealand, Sprout (later Universal Kids) in America, Treehouse TV in Canada, and e-junior in the United Arab Emirates. Although many fans refer to these series as TV Series 7 and 8 of The Wiggles, they have never officially been called that, as The Wiggles themselves instead consider it to be its own Series 1 and 2.

The first series features music videos from the current generation's first three videos Taking Off!, Furry Tales, Pumpkin Face, as well as new studio clips (also used for Wiggle Time TV's Wiggly Songtime! series) and live songs from an early performance of the Taking Off! Tour. Throughout the series, the original members would make cameo appearances as other characters.

Series 2 also features songs from the same three videos as before, as well as Go Santa Go!, Apples & Bananas, Wiggle House, and their 2014 Australia Day Concert performance. Playing other characters this series were Lee Hawkins and Robert Rakete, who had previously guest starred in Wiggle House.

The original versions of these episodes are 11-minutes in length, totaling 52 episodes per series. However, other versions exist where the 11-minute episodes are combined into a length just short of 22-minute episodes, totaling 26 episodes per series. In these versions, Episodes 1 and 2 become Episode 1 ("Miss Polly Had a Dolly & Wake Up, Lachy!"), Episodes 3 and 4 become Episode 2 ("Lachy Shrunk the Wiggles & The Wiggly Singing Symphony"), etc. When combined, the credits of the first episode, as well as the intro and theme song of the second, are cut. At the wrap-up of the first episode, Dorothy asks "What have we done so far?" rather than "What did we do today?", and says "So keep watching more..." or "We'll have more fun coming up on Ready, Steady, Wiggle!, and I'll see you all again soon" instead of "I'll see you next time on Ready, Steady, Wiggle! Bye!", before cutting to a commercial break (or transitioning next to the episode). No other edits are made to the episodes. These versions of both series currently air on Treehouse TV in Canada, and Series 2 currently airs on Universal Kids in the United States.

There are 7-minute edits of the episodes Wake Up, Lachy! (re-titled as "Twinkle, Twinkle!") and Lachy Shrunk the Wiggles (re-titled as "Lachy Shrinks The Wiggles!") used on the Furry Tales and Pumpkin Face DVDs respectively. It is unknown if any more exist.

6 of the first 7 episodes were released as bonus features on the DVDs for Furry Tales (ep. 3), Pumpkin Face (ep. 2), Go Santa Go! (ep. 1), Hot Potatoes! The Best of The Wiggles (ep. 5), Apples & Bananas (ep. 6) and Wiggle House (ep. 7). As mentioned above, the first two of these DVDs contain edited down versions of these episodes with a running time of 7 minutes, while the rest are all presented in their original 11-minute versions. The episodes The Wiggly Singing Symphony and Emma's Bike! appeared on the ABC Kids compilations Playtime! and Aussie Favourites.

From 2014 to 2016, 5 DVD compilations were released containing 12 episodes each. Wake Up, Lachy! and Emma's Bowtiful Day! feature episodes from Series 1, while Anthony's Fruity Feast!, Simon Says! and Fun Fun Fun! contain episodes from Series 2. The first four of these were released together in a box set called Fab Four Faves. All episodes are presented in their original 11-minute versions on these DVDs. The same 5 compilations of episodes are available on iTunes in Australia and the United Kingdom. An exclusive compilation titled "One, Two, Three, Four" featuring 4 episodes from Series 2 is also available, in Australia only. It includes the episodes This Little Piggy, Zamel the Camel, Emma, the Firefighter, and Lachy Can't Sing.

In the United States and Canada, there are 10 volumes of episodes available for purchase on iTunes. Here they are presented in their 22-minute versions, with 5 episodes (10 segments) per volume. Volumes 1-5 consists of Season 1 episodes, while Volumes 6-10 are made up of Season 2 episodes. At a total of 50 episodes (100 segments), the 26th episodes from each season are missing ("What's That Sound? & A Juicy Story" and "I'll Tell Me Ma! & Lachy's Pappadum Party").

Both complete series in the original 11-minute format are currently available for streaming on Netflix in Australia, New Zealand, the United Kingdom and Canada, and on Hulu & Netflix in the United States. 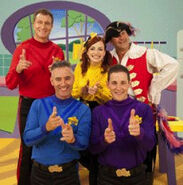 The Wiggles and Captain Feathersword

Backdrop of the Wiggly Lounge Room

Backdrop of the Wiggly Kitchen

Behind the Scenes: "Anthony's Alphabet"

The Wiggles and Captain in a promo picture

Dorothy and Anthony in a promo picture

The Wiggles,Henry and Captain in a promo picture
Add a photo to this gallery

Rocking Out with Lou

Dorothy and the boys

Dorothy and the boys

Emma on her scooter 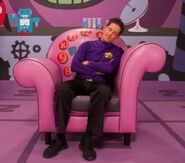 Lachy sleeping in his armchair 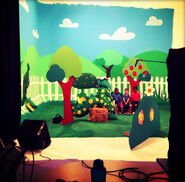 Behind the Scenes: "Dorothy the Dinosaur Interviews"