"Rock-a-Bye Your Bear" is The Wiggles' first ever original song and it's now one of their most iconic songs. They always sing it in live shows and in some of their videos. It made its debut in the first Wiggles album back in 1991. The Purple Wiggle falls asleep at the end of the song.  The song was written by Anthony Field and Greg Page. 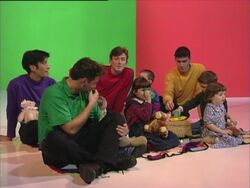 The Wiggles Rock-a-bye Your Bear (Live)
Wiggle Around Australia version
Add a photo to this gallery
Retrieved from "https://wiggles.fandom.com/wiki/Rock-a-Bye_Your_Bear?oldid=624282"
Community content is available under CC-BY-SA unless otherwise noted.