2013–present
Simon is the red Wiggle who replaced Murray in 2013. Though he was originally supposed to replace Sam in 2012 and be the new yellow Wiggle, he was later switched to be the new Red Wiggle.

From 2013-2016, he and Lachy were the two main vocalists of the current generation.  Following Dance Dance!, he began to sing less often and began playing various guitars in the videos and television series, as well as the drums on a few occasions and the tambourine.  He also plays the bass guitar at concerts, where he still does a considerable amount of lead singing compared to the albums and videos.

Unlike Murray, Simon does not play guitar but usually instead lead sings in new Wiggles songs. He sings in a baritone and operatic voice. His favorite game to play is Simon Says. 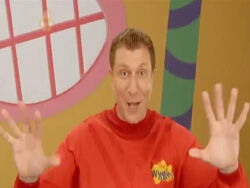 Retrieved from "https://wiggles.fandom.com/wiki/Simon_Wiggle?oldid=688670"
Community content is available under CC-BY-SA unless otherwise noted.