Space Dancing! (An Animated Adventure) is the 14th Wiggles video. This is also the first full-length Wiggles video to feature the characters being animated in CGI (although previous videos featured animated music videos for the songs Caveland and Jimmy The Elf).

It only features 6 songs, the smallest amount of any Wiggles video. 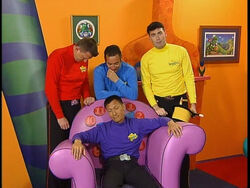 This video did not have an album companion of its own, but all 6 songs were included at the end of the Wiggle Bay album, and all songs except Fergus' Jig were included in the Eagle Rock! single CD.

The Wiggles - Space Dancing! trailer
Add a photo to this gallery
Retrieved from "https://wiggles.fandom.com/wiki/Space_Dancing!_(An_Animated_Adventure)_(video)?oldid=601507"
Community content is available under CC-BY-SA unless otherwise noted.