The Latin American Wiggles (Los Wiggles) are a Spanish-speaking franchise of The Wiggles created during the mid 2000s. The line-up is made up of Zoe Velez (Blue Wiggle), Fernando Moguel (Yellow Wiggle), Katty Villafuerte (Purple Wiggle) and Francisco Madrid (Red Wiggle).

The TV series they starred in originally aired on Disney Channel Latin America in 2006[1], but no official CDs or DVDs featuring the group were ever released. Select songs and film clips have appeared in mainline Australian Wiggles releases, often serving as the backing music to clips of animated Mariachi Wiggles; caricatures of the regular Wiggles dressed in sombreros and mustaches.

On May 22, 2021, Anthony Field announced on Twitter[3] and Instagram that international Wiggles content (Taiwanese and Latin American) will be making its way to The Wiggles' YouTube channel. A Spanish-language Play Time video starring Francisco and Zoe will be on the YouTube channel as well.

On June 7, 2021, The Wiggles Uploaded a video of Francisco and Zoe announcing that The Spanish Wiggles clips would be uploaded to the channel soon, followed by the Spanish music video of Dorothy (Would You Like To Dance?).

On June 11, 2021, the first episode of The Latin American Wiggles Show was released on the official Wiggles YouTube channel, with songs never before released, such as the Spanish versions of Henry's Dance, Shaky Shaky and D.O.R.O.T.H.Y. (My Favourite Dinosaur). All episodes have been confirmed to be released and will be uploaded every 2 weeks (some episodes were delayed due to other projects), along with Spanish Play Time videos that will air on the first Monday of every month.

On September 17, 2021, Anthony Field announced on his Instagram story that The Latin American Wiggles' discography will be released on Spotify at some point in the future.[4]

Songs listed were featured in available TV episodes unless otherwise noted. DO NOT add any other songs until they are released.

The voice of Wags the Dog is currently unknown.

The Latin American Wiggles in "The Wiggles Show!" TV Series 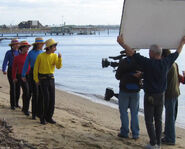 The Latin American Wiggles filming Having Fun At The Beach

The Latin American Wiggles With Wags the Dog 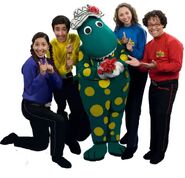 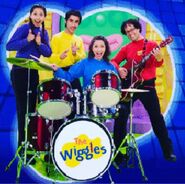 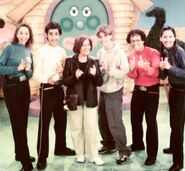 The Latin American Wiggles - Can You (Point Your Fingers And Do The Twist?)