Forward Music
The Taiwanese Wiggles (also referred to as The Wiggles Asia and then The Mandarin Wiggles) was a localization of The Wiggles for the Taiwan market, created by Walt Disney Taiwan in 2003 and discontinued in 2007.

The Wiggles signed a licensing agreement with Walt Disney International in 2001 and auditions commenced in June 2002.

To make sure that the mannerisms of Taiwan's Wiggles remained as close to the original group as possible, Carlos, Anni, Danny, Arthur and stand-in, Kurt were packed off to Sydney. There the group underwent six weeks of training at "Wiggles boot camp".[1]

Songs listed were featured in available Taiwanese/Mandarian Wiggles media unless otherwise noted. DON'T add any other songs until they are released.

Songs listed were featured in available Taiwanese/Mandarian Wiggles media unless otherwise noted. DON'T add any other songs until they are released.

The Taiwanese Wiggles' first television series aired on Disney Channel Taiwan weekdays at 7:30am and 11:00am and on weekends at 6:00am and 8:55am beginning in March 2003.[citation needed] A second series featuring the second line-up was broadcast in 2006.

In addition to being Wiggles, Danny Shao and Anni Hsu also provided the voices for the Wiggly Friends; Henry the Octopus and Wags the Dog were voiced by Shao, and Hsu voiced Dorothy the Dinosaur.

The Wiggly Friends were given names in Mandarin for the first iteration of the Taiwanese group. In the second iteration, their names were reverted back to their original English versions.

The Mandarin Wiggles in the farm in Wiggly Animation.

The Mandarin Wiggles with cups of water.

The Mandarin Wiggles at the beach. 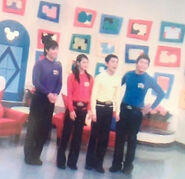