Start a Wiki
The Wiggles are a famous children's band from Australia that formed in the year 1991 when founder, Anthony Field, "had the idea to make a children's album". He met fellow founding members Murray Cook and Greg Page at Macquarie University, where all three were studying early childhood education. He later recruited Jeff Fatt. who he was previously band mates with in the pop group The Cockroaches, and Phillip Wilcher, a music instructor at Macquarie. Wilcher left the group soon after the release of their first album.

Their popularity in Australia grew throughout the 1990s, with concert attendance constantly growing. Several best-selling and award-winning albums and videos allowed them to finance their first (and so far only) theatrical feature film, and their first TV series. By the mid-2000s, The Wiggles had reached massive international success, as they toured many other countries, including the United States, Canada and the United Kingdom.

By 2006, Greg was forced to leave the group due to an illness called Orthostatic Intolerance and was replaced by his long-time understudy Sam Moran by the end of that year. Although Greg returned in 2012, he along with Murray and Jeff soon retired, being replaced by Emma Watkins, Simon Pryce and Lachy Gillespie, respectively, in 2013. As of 2019, Anthony remains the only original member still in the group.

The Wiggles have released close to fifty albums and videos and toured relentlessly, not just in Australia, but in the USA, Canada, Europe, Asia and many other places. They have one numerous amounts of awards and have been named the most successful children's act of all time.

Originally, Field and Fatt were in the pop 80's band called The Cockroaches. One day, Anthony Field dropped off his sister to Macquarie University and decided it looked good, so he could sign up as well. He talked to Greg Page, who was currently a roadie for The Cockroaches and convinced him to come and have a look too. This is where they met Murray Cook and Phillip Wilcher. They studied Early Childhood Teaching.

One day, Anthony had the idea to record an album of children's music, so the five guys,  recorded and released the album in 1991.

Phillip Wilcher was employed by Macquarie University as an assistant to the Early Childhood Music program in which Field had enrolled as a student. Wilcher had previously been employed as Assistant Editor for the Classical/Educational Division of the Sydney based music publishing house of J Albert and Sons Pty Ltd as well as having worked for the ABC. Field first approached Wilcher requesting he write for the debut abum. Wilcher also contributed the most financially to the project. The album as to afford the Wiggles a contract ith the ABC for to further recordings but Wilcher soon found himself dumped by Field after the debut album appeared.

Wilcher states he had a verbal agreement to write for subsequent albums and whilst a document was drawn up for Phillip Wilcher agreeing that he would just stay behind the scenes as a writer and not be classified as a performer it was never officially acted upon. Wilcher did however appear in the film clip for Dorothy the Dinsosaur at the request of Anthony Field some months after initially leaving the group as a performer. According to Greg Page's autobiogrpahy, it would seem none of the other members of the group knew he had been asked back to be in the clip. In May 1992 went to the US to perform at celebrations honouring the legendary showman/pianist Liberace, whose family and friends Wilcher knew well, and when he came back to Australia he could not get in any contact with Anthony Field or any other of The Wiggles. Eventually, he was told that the album was recorded without him and he was no longer needed. Wilcher was in the States no longer than three weeks. Greg Page states in his book "Now and Then" that they had a three week deadline by which to record the second album "Here Comes A Song" , a deadline Wilcher was apparently unaware of and one which coincides with the exact dates he was performing in the States.Although he had already written nearly the whole album by himself, he later released a children's album of sheet music independently involving those songs which has received favourbale critical acclaim from several early childhood music experts.

In 1991, Wilcher worked with the early childhood music program at Macquarie University. Anton Field, a childhood development student, approached him about a music group Field was contemplating. Wilcher joined Greg Page, Jeff Fatt, Murray Cook, and Field from its earliest days through the production of the CD The Wiggles. Wilcher claims to have "contributed the most musically to the debut album."

In 1992, Wilcher travelled to the United States. When he returned he was informed that the group did not need him, and that a second album had been taped while he was overseas. Wilcher says he has no idea as to why he was kicked out of the group. The Wiggles, however, dispute this account. Dianna O'Neill, the group's spokeswoman, states that Wilcher wrote a letter of resignation. "There is no story. There was no fight, no fallout. Wilcher was just not so much into children's music, he was more into classical music."

Over the years, Wilcher's involvement with the group has been essentially deleted. The debut CD has been re-recorded, renamed Wiggle Time and re-released with all of Wilcher's contributions canceled. Wilcher indicates that he was too "reclusive" to be a Wiggle.

Two interesing articles have appeared in recent years about Wilcher's involvement with the Wiggles : "A Life Less Wiggly" by Steve Dow and "Becoming A Top Pre School Band was No Child's Play For Wiggles" by journalist Nick March writing for Abu Dhabi's The National.

The Wiggles, by generation

The original five members of the group, before they wore colored skivvies.

The Wiggles once Phillip left. This is the era many people think about when The Wiggles are mentioned and most people who grew up with The Wiggles grew up with this era, as it lasted the longest (so far), and is when most of what we know about them today came about (outfits, logo, characters, etc.)

The group as it was when Greg retired from the band so he could recover from Orthostatic Intolerance.

This is the current Wiggles generation, after Murray, Jeff, and Greg all left.

Since the first album, The Wiggles have introduced a number characters in songs and stories, a few of which have had major recurring roles in later years. Three characters were created from what The Wiggles saw appeal to children: a dinosaur, a dog and a pirate. To ensure they were as child-friendly as possible, the dinosaur has an appetite only for flowers (specifically roses), and the self-proclaimed "friendly pirate" has a sword made of feathers. From an idea to name a character after Cockroaches drummer Tony Henry came an octopus, who would use his eight legs to drum.

The Wiggles have involved other minor characters into their world, often in debuting in TV or video appearances. Sometimes the characters would recur, but not to the same level as the main Wiggly Friends. These include Officer Beaples, a police officer, Zardo Zap, an alien, Professor Singalottasonga, a music instructor, and Ringo the Ringmaster.

In 1996, The Wiggles did a pilot for ABC in Australia, but it was rejected due to artistic differences. They financed their own TV Series in 1997, and Seven Network aired it a year later. They would also air their second series in 1999, around which time Disney Channel began rerunning the series and several specials, after positive response to the 1998 TV special The Wiggles: Live at Disneyland. Disney Channel's Playhouse Disney block would later become the American home to The Wiggles in 2001. By 2002, The Wiggles were finally able to make a series with ABC, which would become the official channel for all of The Wiggles' following TV Series to this day. In America they have moved to Universal Kids, and can be seen on Treehouse in Canada, ect.

More recent TV series from the current generation include:

Most series, when aired at run-times of about 22 minutes, have 26 episodes (13 for TV Series 1). Versions running 11-minutes also exist of most series, with 52 episodes each (26 for TV Series 1 and The Wiggles' World). However, other shorter series have been made, including "Wiggly Songtime!" (2011-2013) and "Wiggle Town!" (2016), which would run 3-4 minutes, containing only one or two music videos and other brief interstitial segments.

main article: The Wiggles Logo The first Wiggles logo was just "The Wiggles" typed out in a specific font, and it was used from their first album until late 1996. By this time, the logo was redesigned with wiggly letters out of colours and with a yellow background (pictured), which is still used today.

The word 'The' is colored red, the 'i' 's tittle (dot above lowercase letter) is green, the 'L' is purple and leaving the other letters blue. However, in Wiggly, Wiggly Christmas the I is purple on the title screen. 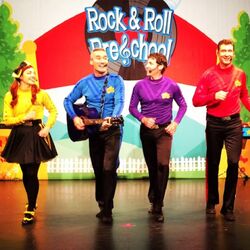 Retrieved from "https://wiggles.fandom.com/wiki/The_Wiggles?oldid=568113"
Community content is available under CC-BY-SA unless otherwise noted.