Start a Wiki
"The Wiggly Big Show" is the eighth Wiggles video, and also the second live in concert video, after Wiggledance!.

The live concert video was recorded at the Sydney Entertainment Centre on December 7 and 8, 1998, but released 9 months later in 1999. The backstage skits and the skits in The Wiggles World were filmed in 1999.

This video was won at the 2000 ARIA Award for Best Children's Video.

Pack your bags because it's time to go see The Wiggly Big Show! This video is recorded at the Sydney Entertainment Centre on the December 7 & 8, 1998 for the "Toot, Toot!" tour.

The Wiggles invite you to visit their website www.thewiggles.com.au and also to thank their sponsor at OzEmail Internet.

Wiggly Dressing Room Backstage Scene: Captain Feathersword says the show is getting started as Wags the Dog holds him with a wheelbarrow posture. Captain Feathersword then says, "Watch out, Skally-Wagettes!" The Wiggly Friends, Captain Feathersword, Dorothy The Dinosaur, Wags The Dog, Henry The Octopus and The Waggettes are doing some streches and excersizes while Officer Beaples, the policewoman, and three other officer dancers called the Little Beaples finish their dance and salute.

The title appears for the video.

Opening: A few letters "The Wiggles" spin of the other side, the blue "The", the purple "Wiggly", the red "BIG" and the yellow "Show".

The Wiggles are driving in Wiggles World and then they appear at the concert, driving up the ramp to the stage. The officers bring out some traffic lights.

The Wiggles get out of the car and introduce themselves. Anthony says Why don't we sing some songs together? He asks Greg to move the car. Greg tries to start the car but it didn't work. Greg tries again. It won't start. No toot toot chugga chugga. The Wiggles push the car to the back of the stage. Anthony falls over a few times while trying to push the car.

Jeff says they'll have to walk everywhere. Murray say that's okay, and tells everyone that when you walk it's good to stop at the light, and look both ways.

The Wiggles do this dance with the officers.

Jeff has fallen asleep. Greg says they'll count and do the wiggle fingers at the same time. 1, 2, 3, (wiggle fingers) Jeff wakes up and is flailing his arms around. They ask him what he's doing. Jeff says he dreamt he was a monkey and was doing a monkey dance. Greg replies that's a great idea, let's do a monkey dance.

Anthony wants to talk about the animals. He wants to know if you know their animal friends, like Wags the Dog, Henry the Octopus, and Dorothy the Dinosaur? Greg asks if you know the friendly pirate, Captain Feathersword? Murray asks what we can do to get them onstage. They can use music. Let's play our magical violins and bring them out. They all pretend to play violin as the music starts.

Greg Page then says that was great dancing, and then asks Wags the Dog to turn around and see who's at the back of the stage. It's Officer Beaples the Policewoman. She has something for Wags the Dog: a dancing stick for Wags the Dog and tap hat for Wags the Dog. Which means only one thing, Wags the Dog's going to do a tap dance with his nieces (which means friends or puppies), the Waggettes, called Skally, Flufffy and Cartwhelle. Wags The Dog then nods.

Captain Feathersword moves around in a left way in his pirate ship with his pirate crew inside the pirate ship while the Wiggles are pirate dancing in red, blue, yellow and purple pirate outfits and costumes.

Backstage: Wags the Dog is moving around the backstage.

Backstage: Henry the Octopus dances around.

Backstage: Dorothy is so happy; she's going to sing the Romp Bomp A Stomp after "D.O.R.O.T.H.Y (My Favourite Dinosaur)" onstage with some make-up she's doing in the Wiggly Dressing Room before she does her big dance number with the Wiggles.

Anthony asks Dorothy the Dinosaur what dance she'd like to do next. She says the Romp Bomp a Stomp. Officer Beaples arrives. She and Anthony do some steps to the front of the stage. Then when Officer Beaples blows her whistle, we'll all start dancing. She does just that.

Backstage: Captain walks and bumps his leg and toe against a chest on the floor. Captain winces but then waves to the camera.

Anthony is getting hungry. Murray says let's sing about food, and have everyone do the actions with us.

The Wiggles try to get the Big Red Car started again. Jeff and Murray push the car, while Anthony is in the driver's seat. Greg says that maybe all the singing and dancing is enough to get the Big Red Car started. Let's start the car. Anthony tries to start the car, but nothing happens but a bunch of noises. Anthony tries again, but no luck. Murray thinks we need a mechanic. But where? Let's go get the Wiggly phone book. The other Wiggles agree and leave the stage.

Captain and Wags arrive and notice the Big Red Car in the middle of the stage. Captain says he'll move it, and climbs, well, falls into the seat, and gets stuck upside down. He calls Wags for help.

Wigglehouse Segment: Calling The Mechanic: Murray has the Wiggly Pages and calls a really big phone for the mechanic, who responses on a little video screen, giving Murray some ideas.

The Wiggles, mascots, Officer Beaples and the dancers are all out.

Henry asks if everyone can move their arms like this. Then they can join him in the next dance.

Henry and the dancers leave.

Backstage: Murray has some pom-poms for the next dance.

Captain arrives with a cartwheel. He wants to dance but everyone's gone. Oh, they've all gone to get pom-poms. Captain says he'll start the dance and then everyone will join him; does that sound like a good idea?

The Wiggles and dancers come out with pom-poms. The dancers are dressed in similar colored Wiggles uniforms but the girls have black skirts and the guys have long shorts.

Backstage: Murray notices Jeff is asleep in his chair. Let's wake him up. 1, 2, 3, Wake Up Jeff! Murray compliments Jeff's clothes. Jeff replies the Wiggly tailor made those, and the others have theirs. Murray asks if there's a suit for him, and Jeff affirms. Murray leaves, and Jeff tells now that they've got razzle-dazzle clothes, let's do some razzle-dazzling.

Murray wants everyone to stand up and have a dance with your children and the Wiggles. Everyone's dressed up in the Elvis clothes. Dorothy arrives.

4. Can You (Point Your Fingers And Do The Twist?)

Everyone takes a bow. Jeff has fallen asleep. Anthony asked they're gonna wake him up one more time. 1, 2, 3, WAKE UP, JEFF! Murray says we're almost at the end of the show. Thanks to all the moms and dads, and all the children. It's time to say goodbye to each other. They walk around and wave goodbye. Everyone leaves except for Officer Beaples who introduces each of the mascots who come in and out: Captain Feathersword, then Dorothy the Dinosaur, then Wags the Dog, then Henry the Octopus. Officer Beaples goes to the back of the stage and puts her hands to her ears, expecting to hear something.

Backstage: Santa Claus is giving a ho-ho-ho. Anthony arrives and is glad to see him. Anthony asks Santa if he can hear that: the clapping, the audience wants another song. Anthony suggests they do some Wiggly Christmas songs. He asks Santa if he could join us. Santa replies, "Jolly good!" Anthony will go get the Wiggles. Santa chuckles and says, "Merry Christmas, everyone!"

On stage, Officer Beaples is jumping and running around and waving her arms getting everyone to scream. The Wiggles come back on stage wearing Santa hats. Murray says, "Well, everyone, it's almost the end of the year. Christmas is coming. Hanukkah is coming. We got our Santa hats on. Let's sing some Christmas songs together."

1. Have a Very Merry Christmas

2. Unto Us, This Holy Night

Everybody follows Santa Claus and his reindeer except Captain Feathersword who misses and catches up.

Santa, the dancers, and Wiggly Friends all leave.

Anthony asks Murray if he's had any luck with the mechanic. Murray replies he talked with him, and he suggested they put on their seatbelts on. All the Wiggles get in the car. Anthony explains to Officer Beaples what happened. The Wiggles try one more time to get the Big Red Car started, and it works!

The Wiggles wave goodbye to the audience. They drive off the stage and then the end closing credits roll as they drive in Wiggles World again.

In late 1999, Disney released "It's a Wiggly, Wiggly World! Live in Concert" on VHS in the UK, which is in fact it is The Wiggly Big Show under a different name. Additionally, In the Wiggles World added at the beginning (with the It's a Wiggly Wiggly World! title card), and Tie Me Kangaroo Down Sport was added to the end, replacing Wiggly Christmas Medley (which had already been featured on Wiggly, Wiggly Christmas, released around the same time) and the reprise of Toot Toot, Chugga Chugga, Big Red Car. The original title is still seen after Officer Beaples' Dance, and is referenced on the back cover as well as the name of the concert.

The reason for these differences and the name change is largely unknown. It's possible Disney had no interest in releasing It's a Wiggly Wiggly World! as most of its guest stars were unknown in the United Kingdom, with the most notable exception being Rolf Harris. Adding Tie Me Kangaroo Down Sport to this video allowed it to be seen in the UK without having to release the rest. TV Series 2 had begun airing earlier in the year on GMTV, so the addition of In The Wiggles World, and the It's a Wiggly, Wiggly World! title, may have been an attempt to tie it in with that series.

Like the Australian version, this release has never been put onto DVD. 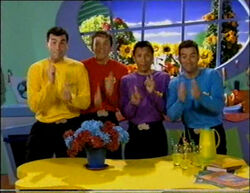 Retrieved from "https://wiggles.fandom.com/wiki/The_Wiggly_Big_Show?oldid=600884"
Community content is available under CC-BY-SA unless otherwise noted.