Note: All songs are from the album of the same name, except where noted otherwise.

Captain Feathersword has a bit of trouble with his microphone, but he fixes it, and introduces everyone, including the dancers: Larissa, Ryan, Tamara, Franco, Lucy, Sam, Brett and Ben!

Song #4: Fly Through The Sky

Song #5: I Wave My Arms And Swing My Baton

Jeff interviews with Frank, a firefighter from New York City, Dept. 227. He shows off his firefighter clothes and some equipment.

Greg asks if you like picking flowers. Apparently, Captain Feathersword does!

Song #8: Say Aah at the Doctors

Pam talks with Dominic, the child.

Greg is with some kids and Jeff.

Anthony interviews Gabriel, who is a grocer, via satellite.

Anthony interviews to the Perkin's family about how fun it is to go swimming at the pool.

Murray and Anthony greet everyone from the Great Wall of China.

Greg feels thirsty and likes to drink milk. He interviews a dairy farmer.

Murray is with some kids and some bread.

Dorothy talks with Michael, who is a dentist.

Song #17: Open Wide Look Inside At The Dentist 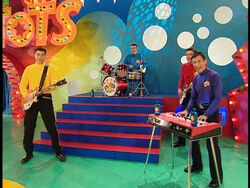 Retrieved from "https://wiggles.fandom.com/wiki/Top_of_the_Tots_(video)?oldid=625147"
Community content is available under CC-BY-SA unless otherwise noted.