Note: All songs are from the album of the same name except where noted otherwise. 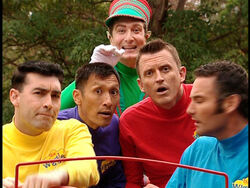 The Wiggles - Whoo Hoo! Wiggly Gremlins! trailer
Add a photo to this gallery
Retrieved from "https://wiggles.fandom.com/wiki/Whoo_Hoo!_Wiggly_Gremlins!_(video)?oldid=622956"
Community content is available under CC-BY-SA unless otherwise noted.