The Wiggles and their friends spend the day at Wiggle Bay. They hang out with the Wiggly dancers, encounter a friendly mermaid, and also find a magic shell.

Note: All songs are taken from the album of the same name.

The Wiggles and their friends step off their rowboat and introduce themselves. They unload the boat in Wiggle time and relax for a bit. Captain Feathersword looks out at the bay and notices their boat has drifted off to sea because he forgot to tie up the boat. Now they are stuck in Wiggle Bay. Anthony suggests when things go wrong just sing a song.

The Wiggles go fishing, except for Jeff, who prefers to take a nap. Anthony casts his line into the water along with the whole rod. They see something glittering in the water.

The Wiggles net a shell with some writing on it, saying to pass it to someone you like. Wags the Dog suggests giving it to Dorothy, so they do just that.

The Wiggles meet Magdalena the Mermaid and Captain Feathersword has a dance with her, originated from Mexico, called the Cachuca.

The Wiggles find a bottle with a message but some of the writing has been smudged out from the water. They give the message to Dorothy, who somehow relates it to the shell she has.

There's some magical treasure nearby and so the Wiggles get Wags to help dig it out. After scouting a couple of random locations with the audience's help, they find that Wags has located a spot. They start digging and find random objects, but Wags continues digging and finds a key! They decide that Captain Feathersword should hang on to the key for safekeeping.

Captain Feathersword and Magdalena return with good news. King Neptune has found the boat and they have it now. King Neptune calls in to say thanks for getting the key back. 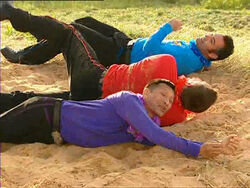 Retrieved from "https://wiggles.fandom.com/wiki/Wiggle_Bay_(video)?oldid=610145"
Community content is available under CC-BY-SA unless otherwise noted.