Production primarily took place earlier in 1993, whereas Uncle Noah's Ark music video was filmed in 1992. The Wiggles and their friends Dorothy the Dinosaur, Henry the Octopus and Captain Feathersword all made their debuts (Wags the Dog wasn't created at the time). The video includes songs from their first three albums (with the songs from their first album being re-recorded), plus two new songs including their hit song, "Fruit Salad" (later featured on their 1994 album) and "Marching Along".

It, along with its 1994 successor Yummy Yummy, was remade in 1998. Because of this, the original version was never given a DVD release. However, on April 6, 2018, it was uploaded on The Wiggles' YouTube channel in 3 parts to launch the Classic Wiggles playlist.

Opening - The Wiggles are waving their hands way up high from the song "Whenever I Hear This Music" and the Wiggle Time logo is showing in front, with the "The Wiggles Video" byline.

Jeff has fallen asleep while standing and then Anthony, Greg and Murray arrive, realizing that he had fallen asleep, and the Wiggles didn't know what to do. Then Murray asked if they can play a trick on Jeff to wake him up. Greg thought it was a great idea and so the Wiggles played a trick on him to wake him up. So Greg asked everybody to wake him up that when we count to 3, we all need to yell Wake Up Jeff!. 1, 2, 3, Wake Up, Jeff! Jeff jumps and screams and then runs around to the back of the set and then to the front, instead of his usual blubbering. Anthony asks Jeff if he's awake now and he said that he is awake. Anthony was glad for him to be awake because they want everyone to Wiggle with them and its a great idea for Jeff and the others, and now its time to Wiggle! Lets Wiggle now here we go!

Greg tells everyone that there going to sing a song all about four animals. And at the end of the song, he says that lets all growl like a scary bear.

Murray introduces the next song about a man who lived a long, long, time ago. His name was Noah and he had to save some animals from a flood so he built a big boat and called it an ark. Greg, Anthony, and Jeff do the animal noises with Murray, (Except the little pig, OINK!) They do duck quacking, cow mooing, rooster crowing, cats meowing, not pig oinking (the Wiggles jump in surprise and look around for the pig when they hear that sound). The goats shook their heads and went beh. Murray thought what else was on the ark, and some long-eared donkeys went hee-haw, hee-haw. Murray says it was noisy on the ark, but still lots of fun. He then invites the audience to come on board the ark with The Wiggles.

The Wiggles and some kids are doing paintings using droppers. Anthony asks have you ever done a painting like this? Anthony holds out his dropper and tells that when it falls out of the dropper, it looks like rain.

The girls dance to this song. Greg holds his teddy bear while singing. Jeff and Murray play the guitars while Anthony plays the zither (not heard in the audio track itself).

Anthony talks about Dorothy the Dinosaur. Wherever she goes, sings and plays, she comes along with the Wiggles, she says "romp bomp a chomp." As the Wiggles repeat "romp bomp a chomp," they make chomping gestures with their hands. Dorothy the Dinosaur loves to sing with children, but the only trouble is though, they don't know where she is, Anthony askes that if you know where Dorothy is? Dorothy walks in from the right but at the back of the set. The Wiggles hear from the audience that she's over there, so they looked for Dorothy by moving to the camera's right side of the set. But she isn't there. Greg askes where? Oh, she's on the other side? And they are moving to the left side of the camera and they looked over there. While the Wiggles scurry to the left, Dorothy in the back part of the set scurries to the right side of the camera. Greg asks everyone if they're sure they've seen Dorothy; maybe it was a trick that we were doing. Dorothy walks up behind Jeff. She's where? Behind Jeff? Jeff looks to his left as Greg told him that she is behind him, but Dorothy is still behind Jeff, who says she isn't behind me. Greg tells him she's is there, she is. Jeff says he'll have another look, this time to the right and he sees Dorothy. But Jeff thought the first time she is still not there but Jeff affirms she's there, and then they all jump in surprise. They were happy to see her since everyone knows how to sing "romp bomp a chomp" as when they all sing the next song "Dorothy the Dinosaur".

Greg does the magic show about the colouring book with Anthony and Jeff doing the music of "Sing A Song Of Polly" for background music. For the music, Anthony plays a tin whistle and Jeff plays the accordion.

Jeff pretends to be an octopus with an extra shirt on. He is making blubbering noises while the half-worn purple shirt is over his head covering everything but his face as he swings around the sleeves. He asks if you know what he is. He's an octopus. He blubbers again and then pokes his head through the top. He's not an octopus, its just Jeff. And then he tells that he has a friend who is an octopus and his name is Henry the Octopus.

The Wiggles and some kids are making their fruit salad while they all seated at the low table together and Anthony explains about making fruit salad. You can even make your fruit salad at home. Make sure there's an adult there and that you use a plastic knife.

The Wiggles and all the kids are marching along to Dorothy's birthday party. Anthony is playing an acoustic guitar and leading the line of all kids and The Wiggles. The kids are holding presents to give to Dorothy. He stops and tells everyone to stop and he tells everyone that they're going to Dorothy the Dinosaur's birthday party One kid yells by saying "Yeah!" and Anthony asks if we can come with them to march and the same kid from the march that yelled yeah! he yells "Yeah!" again because he is just a one year old, so Anthony tells us to come along and join in the march over to the party. Then they continue marching around singing and then walk off the set.

Greg remarks what a great party it was, but now they're tired so it's time to go. They all say goodbye and then they all fell asleep except for Jeff. Then Jeff tries to wake them up by saying "Wake Up, Wiggles! Wake Up!" but they didn't wake up. Jeff then crosses his arms and shakes his head with a sigh. But it's always Jeff that falls asleep, isn't it, but it doesn't matter.

The credits come up with "Get Ready To Wiggle" for background music.

Note: All songs are taken from Here Comes a Song except where noted otherwise. 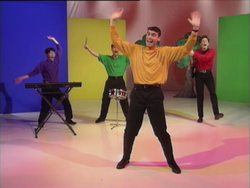 Classic Wiggles Wiggle Time (Part 3 of 3)
Watch Part 3!
Add a photo to this gallery
Retrieved from "https://wiggles.fandom.com/wiki/Wiggle_Time!_(1993_video)?oldid=610397"
Community content is available under CC-BY-SA unless otherwise noted.