Start a Wiki
"Wiggle Time!" It is a remake of a the original 1993 video of the same name. It and Yummy Yummy's remake, which were both released on the same day, are arguably The Wiggles' two most popular videos, with both having been released worldwide numerous times.

Some songs were re-recorded for this version, such as Get Ready To Wiggle and Dorothy the Dinosaur (song. The songs Ponies and Captain Feathersword Fell Asleep on His Pirate Ship (Quack Quack) were also added to this version, as well as 3 songs recorded live from The Wiggles Big Show.

Live from The Wiggles Big Show

Greg introduces the next song about a bear, a kangaroo, a snake, and a wombat.

Murray introduces the next song about a man who lived a long, long, time ago. His name was Noah. He had to save some animals from a flood so he built a boat and called it an ark. Murray then does the animal noises which are the duck, cow, rooster, cat, goat and the donkey. He asks everyone if they can come aboard onto Uncle Noah's Ark with the Wiggles.

Jeff is painting something that he saw on a farm. He shows the picture to the audience... it's a pony!

Anthony talks about Dorothy the Dinosaur, and introduces the song about the first time they met Dorothy.

Jeff pretends to be an octopus, and tells everyone that he and the rest of the Wiggles have an octopus friend - Henry!

The Wiggles are having a teddy bear picnic, and sing a song for everyone.

Jeff is with two girls, who are painting by using droppers. Jeff watches the paint come out of the dropper, saying that it looks like rain.

Anthony and Greg introduce Captain Feathersword, who accidently flings his feathersword into the air a few times while swinging it around. Captain remarks that he's "going a bit quackers", leading into the next song.

Greg and the other Wiggles lead a line of kids, who are holding presents. Greg says he and the others are going to Dorothy's birthday party.

The Wiggles sing a birthday song for Dorothy.

The "Wiggle Time!" album was released on August 30, 2000 with 27 tracks. It is basically a reissue of Here Comes a Song, with some tracks added or removed. Only the new recordings of Get Ready To Wiggle, Rock-a-Bye Your Bear, and Dorothy the Dinosaur are featured, with the other songs re-recorded for the video remaining the original 1992 versions. The American version, "Let's Wiggle" fixes this error. 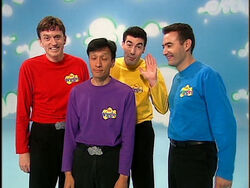 Classic Wiggles Wiggle Time! - 1998 version (Part 4 of 4)
Part 4
Add a photo to this gallery
Retrieved from "https://wiggles.fandom.com/wiki/Wiggle_Time!_(1998_video)?oldid=615147"
Community content is available under CC-BY-SA unless otherwise noted.