For other uses, see Wiggle and Learn.

Wiggle and Learn
The Pick of TV Series 6

"Wiggle and Learn: The Pick of TV Series 6" is a DVD episode collection of The Wiggles' 6th TV series.

Unlike The Pick of TV Series 4 and 5 DVDs, this uses the 11 minute versions of the episodes, and as a result contains 18 episodes instead of 9. It is the only TV Series DVD in Australia to feature Sam as the yellow Wiggle, and is the final for Murray and Jeff.

Wiggle and Learn features over 70 songs from the world's most successful pre-school group, The Wiggles. As professional early childhood educators, The Wiggles know that children learn best through play! Wiggle and Learn features songs that engage children and encourage fine and gross motor skills development. Nursery rhymes are used as tools for noticing sound patterns, developing vocabulary, learning story sequences and strengthening listening memory. Join The Wiggles and all your favourite Wiggly friends, Dorothy the Dinosaur, Wags the Dog, Henry the Octopus and Captain Feathersword, as they present a host of educational opportunities in a fun, interactive environment that will extend children's knowledge and understanding. Wiggle and Learn with the fab four of fun, Sam, Murray, Jeff and Anthony - The Wiggles! 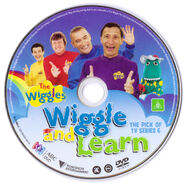 Page 3
(Background music: Over In The Meadow)

Page 5
(background music: Did You Ever See A Lassie?)

ABC For Kids Logo (closing)
Add a photo to this gallery

Retrieved from "https://wiggles.fandom.com/wiki/Wiggle_and_Learn:_The_Pick_of_TV_Series_6?oldid=586867"
Community content is available under CC-BY-SA unless otherwise noted.