Start a Wiki
"Wiggledance!" is the fifth Wiggles video filmed mid-December 1996 in the York Theatre at the University of Sydney's Seymour Centre and was released on June 9, 1997.

It was re-released on September 7, 1998 with Vini Vini cut from the video. In 2013, the video, with Vini Vini reinstated, was shown on the now-defunct Wiggle Time! TV service with an introduction by the then-new Yellow Wiggle Emma, as she attended this concert as a child and as such, can be seen in the audience.

The Wiggles are on stage. They introduce themselves. Anthony says, "Since we're all here, why don't we sing some songs together?" Anthony tells the audience to clap their hands three times, hold their hands up high and sing like opera singers, "la la la la la", bow to the person next to you, turn around and say, "Yippee", put their hands in the air, rock-a-bye your bear (they pretend it's a teddy bear), and bears now asleep.

Anthony tells Greg that someone's snoring. Where's that snoring coming from? It's Jeff. Anthony, Murray and Greg are surprised to see that Jeff falling asleep. So what can we do? Greg asks the audience to count to three and wake Jeff up. When he wakes up, maybe he'll do some silly things. Here we go: One, two, three. Wake up Jeff!!! Jeff wakes up and tweets like a bird. Murray asks Jeff if he is awake. Jeff says that he's awake now. Murray tells him not to sleep because we need (swinging both his arms backwards like a windmill) you for the next song. Zingle, zangle. Jeff flaps his arms like a windmill, too. Greg tells him to show everybody how to dance in the next song. But, oh, no! Jeff falls asleep again. Greg tells the audience to wake up Jeff one more time. One, two, three. Wake up, Jeff! Jeff wakes up again and once again flaps and tweets like a bird. Anthony tells Jeff if he's awake now. Anthony thanks everyone for waking Jeff up. Anthony tells Jeff to show everyone how to point our fingers and do the twist. Greg also tells Jeff to stand on one foot, and shake your hands. Murray tells everyone to point our fingers and do the twist together.

At the end of the song, Dorothy has done a split. Greg and Anthony try to lift her back up, but she's heavy. They ask if she's okay, but Dorothy quietly responds, "help me." They call Murray and Jeff to help lift her, but no luck. Murray has an idea. He asks everyone to get a big breath together to help lift Dorothy up. The Wiggles, Dorothy and the audience all take a deep breath, and finally, they lift Dorothy up. Dorothy thanks everyone. Anthony tells Dorothy if she'd like to come back later and have another dance. Dorothy responds that she'd love to. Now it's time to wave goodbye to Dorothy. She waves goodbye and leaves.

After Dorothy leaves, Murray introduces us to this song were they are not going to use any instruments but they'll use their hands to do the next song: Vini Vini.

Who's that yawning? They think it's our sleepy friend, Jeff. But Jeff arrives and says he's not yawning; maybe it's Anthony. It's not Anthony, or Greg, so who could it be? They ask the audience and they reply Murray! Murray tells the others he's really tired; last night there was a dog barking out his window. As Wags arrives, Jeff asks Murray what the dog looked like, describing the details of Wags. Murray affirms each point until Jeff points if it looks like the dog behind him. Murray turns around and says, "It's Wags the Dog!".

Greg tells Wags that was great dancing but it's time to say goodbye for now. Bye, Wags!

Captain tells everyone to give yourselves a big clap. Jeff has fallen asleep again. This time, Anthony says that Jeff seems to be in a really deep sleep and that we need to think of a new way to wake Jeff up. He asks a boy from the audience; he replies sing a song. He asks the boy's name, and he replies Christopher. What song can we sing to wake Jeff up? Christopher replies, "Wake up Jeff." That makes sense. Anthony teaches everyone how to sing and dance to "Wake Up, Jeff." They sing "Wake up, Jeff" line; it almost wakes him up but he's still asleep, they try again but the same thing happens, so they'll have to sing the whole song.

Jeff is finally awake. Murray thanks the audience for waking Jeff up.

Everyone leaves except Greg and Anthony. Greg talks about the special part of the show when Murray arrives in a doctor's coat. Look, everyone. It's Doctor Murray! What's up, doc? Doctor Murray says that there were joeys jumping on their beds and fell off and bumped their heads. Anthony asks if they were jumping like this: he starts jumping like a joey. Murray affirms and runs off. Anthony says he can see someone jumping like that; in fact, all the kids are jumping around.

Henry the Octopus arrives with Greg. Henry asks Greg if he could sing a song about his friend, Baby Beluga. Greg replies, sure, but who is Baby Beluga. Henry explains he's a little whale. He likes to swim, dive, and splash in the ocean. Anthony arrives and gives Greg a whale tail. Greg puts it on and asks Henry how long the song would take to sing? Henry thinks about it, and replies that it would take a little whale.

Henry thanks everyone for singing that song. He asks Greg that he has another dance. Anthony calls everyone to stand up and dance.

Dorothy and the dancers leave. Murray invites everyone to do the actions for the next song.

Anthony says you can dance any way you like on the next song. It's time to wiggle.

Murray tells the audience that the show is almost over. He gives special thanks to Sian, Emma, Jessica and Cassie for being great helpers for Dorothy. He also would like to say thanks to the moms and dads, grandparents, caregivers and especially the kids. They all give a big clap. And right now Murray says that it is time to say goodbye to each other. The Wiggles and their friends all say goodbye to the audience as "Get Ready To Wiggle" plays in the background. They leave the concert, except Captain Feathersword. He does his crazy dance and says "Bye, see you later" quickly a bunch of times, and stops for a moment. Where did everybody go? But the audience is still there. Captain Feathersword asks if they would like to see his special dance one more time. Okay!

The Wiggles say goodbye to everybody and leave as the credits roll to the music for "Jeff's Christmas Tune". 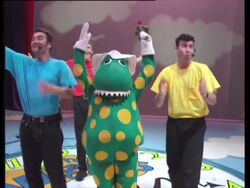 Retrieved from "https://wiggles.fandom.com/wiki/Wiggledance!?oldid=598320"
Community content is available under CC-BY-SA unless otherwise noted.