Start a Wiki
"Wiggly, Wiggly Christmas" is the sixth Wiggles video, and also the first Christmas-themed Wiggles video. It was released on video on October 13, 1997.

The video was re-released in 1999, with Rudolf the Red Nosed Reindeer cut out, and Wiggly Christmas Medley added. Rudolf was thought to be on the UK video but this was a packaging error, and the song did not appear. This also happened in the USA and Canadian edition, with Wiggly Christmas Medley also being removed from the cover of the list, although being added to the video itself.

The video was uploaded in four parts to The Wiggles' official YouTube channel as part of the Classic Wiggles collection, beginning with part 1 being released on November 12, 2018.

Wiggly, Wiggly Christmas is a terrific music compilation of new and favorite Christmas songs. Jeff, Greg, Anthony and Murray join a fun cast of characters in performing both upbeat, familiar carols and creating their own brand of new Christmas classics with all of their friends.

All songs are taken from the album Wiggly Wiggly Christmas, unless listed otherwise.

Snow Globe graphic - The music heard is a combination of "Jingle Bells" and "Get Ready To Wiggle". While we zoom inside the globe, "Deck the Halls" plays.

(Have a Very Merry Christmas Title Card. Title Card slides to the left. A bell ding is heard when we zoom through the door.)

Song 3: Rudolf the Red Nosed Reindeer (Australian 1997 version only) - with a female kid dressed up as Rudolf. Santa Claus also appears. After the first time around, Greg asks everyone to put on their antlers, so everyone puts their open hands to their heads to imitate a reindeer. At the end of the song, they all dance around in a circle acting like Rudolf and the other reindeers.

Song 5: Go Santa Go - done in that style of Greased Lightning with the finger pointing

Unto Us, This Holy Night segment: Anthony talks with a group of kids who are dressed up ready to do a nativity play. Sian is one of the shepherds; she shows everyone her crooked staff. She decorated it with some tinsel. Joseph gets to play Joseph! He will put his hand on Mary's shoulder. Clare gets to play Mary. She has a shawl that she will put on her head. Anthony (Who is one of the kids and has the same name as the blue-shirted wiggle) is in his pyjamas and he helps Clare put on her shawl. Ashley is playing a sheep. Alicia is playing a cow, but she's not in the segment.

(Unto Us, This Holy Night Title Card.)

Song 8: Unto Us, This Holy Night

Anthony is dressed up with a Mariachi hat and he talks with the puppet iguanas Iggy, Ziggy & Frank in the segment. He talks about how to say Merry Christmas in different languages from local Australian natives, and then Italian. And then in Spanish, Iggy tells Anthony that it's "Felice Navidad!"

The Wiggles are making a cardboard sleigh in the segment. Jeff has big scissors, Anthony has glue, Wags and Captain Feathersword are aboard the sleigh, decorating it with tinsel, and Greg has a big paintbrush. So let's all sing a song about riding in a sleigh.

Now they're ready to fly away. Captain Feathersword and Wags then take off.

Christmas Picnic segment: Jeff is sleeping in his favorite comfy chair. He has a dream where Santa Claus and Henry the Octopus are helping the Wiggles put together a sandcastle while a fast instrumental tune plays. Henry dances in circles to it. Then the Wiggles arrive and Greg notices he's asleep. They count to 3 quietly and say, "Wake up Jeff!" loudly. After waking up, Jeff tells them about his dream. It was real; he reaches down for his shoe, picks it up, and pours water out of it. The others laugh.

Jeff's Christmas Tune segment: Anthony and Murray are present with Dorothy the Dinosaur. She knows a lot of different dances so the guys have Dorothy demonstrate some.

The first dance is tap dancing.

The second one is Scottish dancing.

The third one is a line dance. Murray makes a roaring sound, but Anthony corrects him and says it's not a lion dance, it's actually a line dance. Dorothy understands and says she'll do a boot scoot, and does just that. Yee-haw!

The fourth and last one is Irish dancing, which is Dorothy's favorite and she scats along to it with a song called Nya Nya Nya. Ta-daaaaaa! Murray says how Dorothy sure is a great dancer.

(It's a Christmas Party On The Goodship Feathersword Title Card. Recorder plays.)

Song 15: It's a Christmas Party, On The Goodship Feathersword

(Away in a Manger Title Card. Piano plays.)

Wags is Bouncing Around the Christmas Tree segment: Murray has a present for Wags. It's a bone. Greg, Jeff, and Anthony arrive with presents for Wags but they're all present. They are just like Murray's; bones. Murray asks the others and they say that it's a bone. When Murray is sad that the bone is what he got Wags for Christmas and when the others find out that they have the same present as his, they lower their heads and cry, "Oh, no!" except Jeff falling asleep and they look sad, but Anthony says that he'll like them anyway so they raise their heads and they look happy, including Jeff who woke up without letting the others say, "Wake up, Jeff!", but they were okay and so was that. They put the bones under the tree. Wags arrives and gives The Wiggles a present, which is a bone! The Wiggles and Wags laugh.

Song 17: Wags is Bouncing Around the Christmas Tree

During the instrumental break, the nativity play continues and all of the shepherds, wisemen and animals get up and leave.

(We Wish You a Merry Christmas Title Card. It plays the same as Unto Us, This Holy Night.)

Song 19: We Wish You a Merry Christmas

Outroduction: The Wiggles hope you had a great time and wish you a Merry Christmas and Happy New Year. Goodbye!

Close with "Jeff's Christmas Tune" for the background music at the credits. 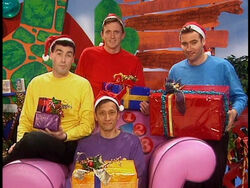 A new version was made in 1999 for the UK VHS release, which was also released in America a year later. This version of the video cut out Rudolf the Red Nosed Reindeer, and added Wiggly Christmas Medley from The Wiggly Big Show at the end. This version kept the original 1997 title cards and the same end credits as 1997 version, just with Rudolf taken out and the Medley added (the copyright date was changed to 1999 as well). However, the UK and Canadian case song list stated that Rudolph the Red-Nosed Reindeer was on the video, and the NZ re-release and Canadian videos also deleted Wiggly Christmas Medley from the song list despite being on the video. In Australia, a similar version was released in 1999, this time with some alternate song title cards and a differently styled end credits sequence.

The album of "Wiggly, Wiggly Christmas" was released on September 6, 1996.

Classic Wiggles Wiggly, Wiggly Christmas (Part 4 of 4)
Part 4
Add a photo to this gallery
Retrieved from "https://wiggles.fandom.com/wiki/Wiggly,_Wiggly_Christmas_(1997_video)?oldid=624910"
Community content is available under CC-BY-SA unless otherwise noted.