"Wiggly Safari" is the 12th Wiggles video. The video was made and released in 2002.

Note: All songs are taken from the album of the same name.

The "Wiggly Safari" album was released in February 4, 2002 featuring 32 tracks. 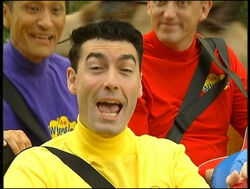 
Cite error: <ref> tags exist, but no <references/> tag was found
Retrieved from "https://wiggles.fandom.com/wiki/Wiggly_Safari_(video)?oldid=625327"
Community content is available under CC-BY-SA unless otherwise noted.