This video features 12 songs with The Wiggles having fun with their friends dancing, playing, and cooking yummy food with John the Cook. But make sure you watch out for Captain Feathersword, because he loves eating everybody's food.

Songs are taken from the album Yummy Yummy except where noted otherwise.

Opening - The opening is a slow motion clip from "D.O.R.O.T.H.Y. (My Favorite Dinosaur)" where The Wiggles are dancing while Dorothy is walking across with her mower by pulling in the Yummy Yummy title out. While the intro plays, the intro to the song "Get Ready to Wiggle" plays.

The Wiggles introduce themselves and John the Cook. Murray asks what John has and he replies that he has some cold spaghetti. Anthony picks up some wiggly spaghetti with a spoon, shaking it. John also has mashed bananas; Greg picks up a bowl of bananas and mashes some with a fork. John also has hot potatoes. Murray picks up one potato but it's hot! He juggles it, passing it to Jeff, who passes it to Anthony, who passes it to Greg. Greg puts the potato back on the dish, and says it's time to sing a song about hot potatoes, cold spaghetti, and mashed bananas. He says to watch out for Captain Feathersword in case he comes by and takes the food.

Greg remarks that Captain Feathersword sure was tricky, since he try to take the food. Now we're going to do a song about shaking. First, let's get into our shaking clothes. 1, 2, 3. Greg snaps his fingers and The Wiggles are now wearing colorful sport jackets.

Anthony talks about Dorothy the Dinosaur while Jeff is tricking him to be wearing a Dorothy tail and hat.

Magic Greg does a magic trick from the box of mystery. For the music, Jeff plays the keyboard, Anthony plays a Fender bass guitar, and Murray plays an acoustic guitar.

Dorothy is dancing with Vanessa the dancer and she had her pink shoes on to do a song about doing a ballet dance.

The Wiggles and John the Cook are making crunchy munchy honey cakes. Captain Feathersword was helping as well.

Murray is playing a game with kids to show what number Murray is holding up.

Anthony is at the workshop room with three kids and they are making clay to mush and hammer.

After the song, Jeff dreamed that he was a monkey. And the Wiggles woke him up and then he started to act like a monkey.

And after when he did the dance, he took a bow and his pirate hat fell off and when he picked it up, his feathersward fell. After Greg thought of an idea, to put the hat back on his head by jumping into the air and it worked.

Greg tells everyone that there are different types of ways to move while the other Wiggles do the actions.

The Wiggles and the others watch a video tape on TV all about Dorothy's birthday party.

The Wiggles and the others are falling asleep and Jeff tries to wake them up, Jeff said, "they always do this". But it dosen't matter. But it is always Jeff that falls asleep, isn't that right?

At the end of the the video in the end credits, the "Fruit Salad" song plays as the closing music.

The "Yummy Yummy" album had 21 tracks that featured songs and poems. 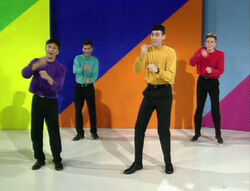 Retrieved from "https://wiggles.fandom.com/wiki/Yummy_Yummy_(1994_video)?oldid=594579"
Community content is available under CC-BY-SA unless otherwise noted.