Start a Wiki
"Yummy Yummy" It is a remake of the 1994 video of the same name, released on April 13, 1998. It is arguably one of The Wiggles' most popular videos along with the remake of Wiggle Time, launching the popularity of songs like Hot Potato, Fruit Salad, and The Monkey Dance (which had first been released years beforehand). Some songs were re-recorded for this version, such as the previously mentioned Hot Potato and The Monkey Dance. Songs like Pufferbillies and Havenu Shalom Alechem were not in the original version but added to this video. No songs from the original video were removed, except for Dorothy's Birthday Party which was a part of a bonus segment at the end.

Note: All songs are from the album Yummy Yummy unless noted otherwise. Re-recorded songs are noted as such. Newly added songs have been denoted by an asterisk (*).

The Wiggles introduce themselves and Paul the Cook. Paul has some hot potatoes, cold spaghetti, and mashed bananas. Greg introduces a song and warns the audience to look out for Captain Feathersword.

Anthony introduces the song about an old steam train and asks everyone to follow along.

Captain Feathersword does a dance that Henry showed him, and The Wiggles do it too.

Greg comments on how there are many places you can walk or run to. Dorothy is walking and eating some roses, Captain Feathersword is running to his pirate ship, Henry is walking to the ocean to have a swim, Wags is running to get some bones, and Jeff is sleepwalking!

Anthony is with four children playing with coloured dough and tells the good things about what to do with dough, like hammering.

After the song, everyone goes to sleep and immediately wakes up... except for Jeff! After Jeff is awoken, he bounces around the room. Anthony asks what he is doing, and Jeff says he's doing a monkey dance!

The Wiggles and Captain Feathersword are making crunchy munchy honey cakes, and mention the different ingredients.

The Wiggles are going to get ready for the song, but first they need to get into their shaking clothes. They go behind a curtain and come out dressed in Elvis-inspired clothing.

Each of the Wiggles say hello in a different language. In Hebrew, they say "Havenu shalom alechem."

Greg performs a magic trick involving the Box of Mystery.

The Wiggles and Paul cook up a healthy recipe, fruit salad, by using bananas, grapes, apples and melons with bowls, knives, forks and spoons. 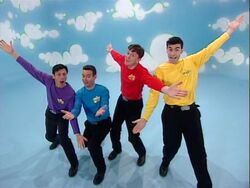 The Wiggles Yummy Yummy (1998 Version) - Part 3 of 3
Part 3
Add a photo to this gallery
Retrieved from "https://wiggles.fandom.com/wiki/Yummy_Yummy_(1998_video)?oldid=615156"
Community content is available under CC-BY-SA unless otherwise noted.