Zoe Velez is a Uruguayan-Australian actress and singer. She's one of the many people who worked with The Wiggles in 2005 as a Wiggly Dancer and as the blue Wiggle in The Latin American Wiggles. She also performed in Dorothy the Dinosaur's Dance Party[1], and even voiced Dorothy herself for a brief period of time in 2006, including Racing to the Rainbow.

Her current appearance is in the Spanish Play time video The Wiggles uploaded featuring her and Francisco and also telling them that The Latin America Wiggles would be on YouTube. But she was in the 2007 - 2012 wiggles skivvy.

Zoe as the blue Wiggle 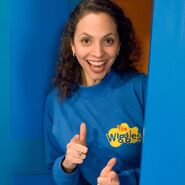